This tutorial provide the basics on time series analysis.

In this tutorial we provide some basics on time series so you can go further explore different types of time series problems. This will serve as base to explore the forecasting algorithms that will be introduced in future tutorials.

The complete code of this tutorial can be found at 01-Intro_time_series_tutorial.ipynb on GitHub.

After completing this tutorial, you will know:

Time series analysis deals with data that is ordered in time. Time series data is one of the most common data types and it is used in a wide variety of domains: finance, climate, health, energy, governance, industry, agriculture, business etc. Being able to effectively work with such data is an increasingly important skill for data scientists, especially when the goal is to report trends, forecast, and even detect anomalies.

The current explosion of Internet of Things (IoT)  – that collects data using sensors and other sources –  allows industries to use anomaly detection to predict when a machine will malfunction. This permits taking action in advance and avoid stopping production. However, this is an example of anomaly detection, which won’t be the main focus of this tutorial. Our main focus is to introduce time series and include some time series forecasting methods.

Some examples where time series are used as forecasting methods include:

All in all, no matter which application, there is a great interest in the use of historical data to forecast demand so we can provide consumers what they need without wasting resources. If we think about agriculture, for example, we want to be able to produce what people need without harming the environment. As a result, we are not only having a positive impact on the life producers and consumers but also on the life of the whole society.

These few examples already give a good idea of why time series are important and why a data scientist should have some knowledge about it.

In general, most time series can be decomposed in three major components: trend, seasonality, and noise.
We can easily access those components applying Python’s statsmodels library seasonal_decompose.

Time series components help us recognizing some of important properties such as seasonality, cyclicality, stationarity, and whether the time series is additive or multiplicative.  Throughout this tutorial, you will learn how recognizing and understanding such properties is essential in the process of building a successful forecasting model.

By observing the seasonal component, we can say if the time series is seasonal or cyclic. Seasonality should always present a fixed and known period. If there is no fixed or known period, we are observing a cyclic signal, i.e., cyclicality.

A time series is stationary if its statistical properties do not change over time.

Many algorithms such as SARIMAX models are built on this concept. For those algorithms it is important to identify this property. This happens because when running linear regression, the assumption is that all of the observations are independent of each other. In a time series, however, we know that observations are time dependent. So, by making the time series stationary we are able to apply regression techniques to time dependent variables. In other words, the data becomes easier to analyse over long periods of time as it won’t necessarily keep varying and so, the algorithms can assume that stationary data and make better predictions.

If the time series is non-stationary there are ways to make it stationary.

In addition, to analyzing the components a common way to check for stationarity is to apply statistical tests such as the Augmented Dicky-Fuller test (ADF) and the Kwiatkowski-Phillips-Schmidt-Shin test (KPSS). Both tests are part of the Python statsmodel library. In the Example’s section we give more details about these tests and how to apply them.

As seen previously a time series is a combination of its components: trend, seasonal, and residual components. This combination can occur either in an additive or multiplicative way.

In an additive model these components are added in linear way where changes over time are consistently made by the same amount.
In the decomposition we can identify it by:

On the other side, in a multiplicative model, components are multiplied together:
Therefore, this model is nonlinear (e.g., quadratic or exponential) and changes increase or decrease over time.

One of the main objectives for a decomposition is to estimate seasonal effects that can be used to create and present seasonally adjusted values.

So to choose between additive and multiplicative decompositions we consider that:

Now time to put all this together and analyse some time series.

This time series has a seasonal pattern, i.e., it is influenced by seasonal factors. Seasonality occurs over a fixed and known period (e.g., the quarter of the year, the month, or day of the week). In this case the period seems to be yearly and causes a peek at the festivities at the end of year.

We can also observe that there is no constant increase or decrease in trend which would suggest a non-linear trend.

Let’s decompose this time series in its components. Because we believe that trend is non-linear, we will set parameter model as multiplicative. By default, this parameter is additive.

Parameter period is optional but you can set it depending on the time series. Because the data is given in weeks, we set the parameter period to the the number of weeks in a year. 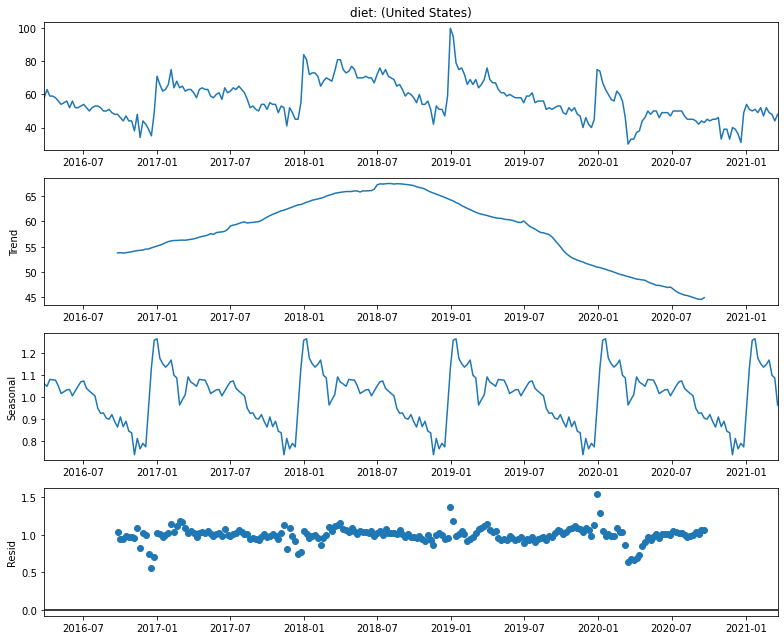 Observe that both frequency and amplitude of seasonal component do not change with time suggesting linear seasonality, i.e., a seasonal additive model. Let’s change parameter model to additive. 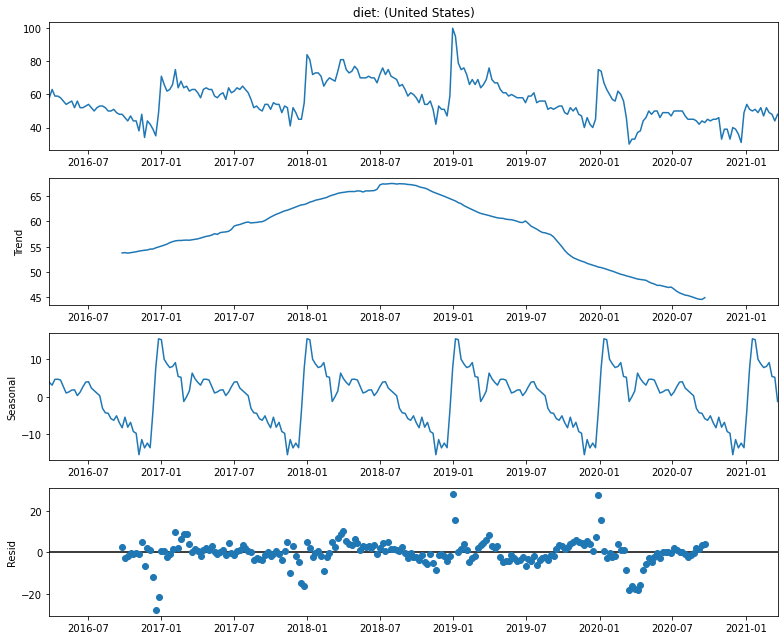 As we suspected, the trend is non-linear. More than this, the time series follows no consistent upwards or downwards slope. Therefore, there is no positive (upwards slope) or negative (downwards slope) trend.

Also, if we compare multiplicative and additive residuals, we can see that the later is much smaller. As a result, a additive model (Trend + Seasonality) fits the original data much more closely.

Augmented Dicky-Fuller test (ADF) is a very popular test for stationarity. However, it can happen that a time series passes the ADF test, without being stationary. Kwiatkowski-Phillips-Schmidt-Shin (KPSS) is another test for checking the stationarity of a time series. It is prudent to apply both tests, so that it can be ensured that the series is truly stationary. Next to that, we cannot forget the importance of also observing the time series plot.

ADF test is used to determine the presence of unit root in the series, and hence helps in understanding if the series is stationary or not. The null and alternate hypothesis of this test are:

Null Hypothesis: The series has a unit root, meaning it is non-stationary. It has some time dependent structure.

Alternate Hypothesis: The series has no unit root, meaning it is stationary. It does not have time-dependent structure.

If the null hypothesis failed to be rejected, this test may provide evidence that the series is non-stationary.

The null and alternate hypothesis for the KPSS test is opposite that of the ADF test.

Alternate Hypothesis: The series has a unit root (series is not stationary).

The following functions can be found here.

When applying those tests the following outcomes are possible:

Let’s apply the tests on the Google Trends data.

Based upon the significance level of 0.05 and the p-value:

ADF test: The null hypothesis is rejected. Hence, the series is stationary

KPSS test: There is evidence for rejecting the null hypothesis in favour of the alternative. Hence, the series is non-stationary as per the KPSS test.

These results fall in case 4 of the above mentioned outcomes. In this case, we should apply differencing to make the time series stationary and again apply the tests until we have both tests pointing to stationarity.

Summing up, the analysis made for the Google dataset so far shows that:

Because of the linear seasonality and small additive residuals we can conclude that an additive model is more appropriate in this case.

Many statistical models require the time series to be stationary to make effective and precise predictions. This is the case of ARIMA models which we will see in 02-Forecasting_with_SARIMAX.ipynb.
A very common way to make a time series stationary is differencing: from each value in our time series, we subtract the previous value.
Other transformations can also be applied. We could, for instances, take the log, or the square root of a time series. 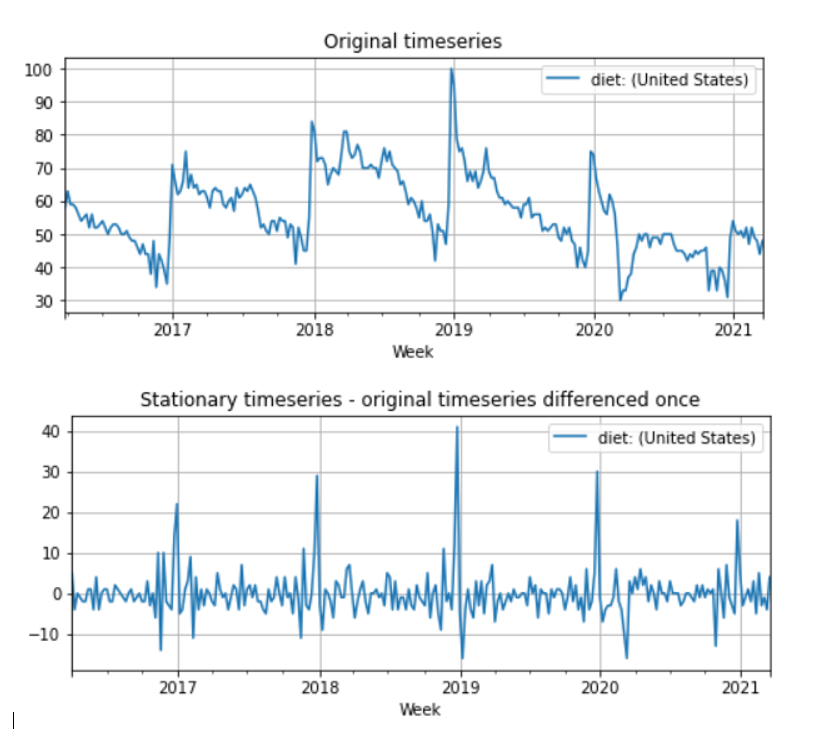 You can’t see any trend, or any obvious changes in variance, or dynamics. This time series now looks stationary.

Visit notebook 01-Intro_time_series_tutorial.ipynb on GitHub for one more example using global temperature dataset time series. This dataset includes global monthly mean temperature anomalies in degrees Celsius from 1880 to the present. Data are included from the GISS Surface Temperature (GISTEMP) analysis and the global component of Climate at a Glance (GCAG).

In this tutorial you were introduced to time series. You’ve learnt about important time series properties and how to identify them using both statistical and graphical tools.

In the future tutorials we will use what was learnt so far and be introduced to some forecasting algorithms:

Thank you for reading!

Comments and questions are always welcome, feel free to get in touch via d.paes.barretto@tue.nl.

For all code presented here as well as in the previous time series tutorial visit our GitHub repository. Danielle has done the Master Data Science and Entrepreneurship at JADS. Her passion is to dive in and give meaning to it. She does that by giving tutorials and masterclasses to students at JADS. Clickhere to send her an e-mail. 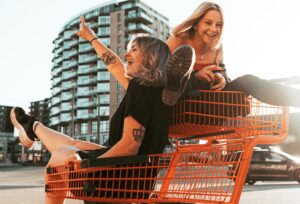